Studying Scientists in their Natural Habitat

Posted on September 24, 2020 by carsoncenter 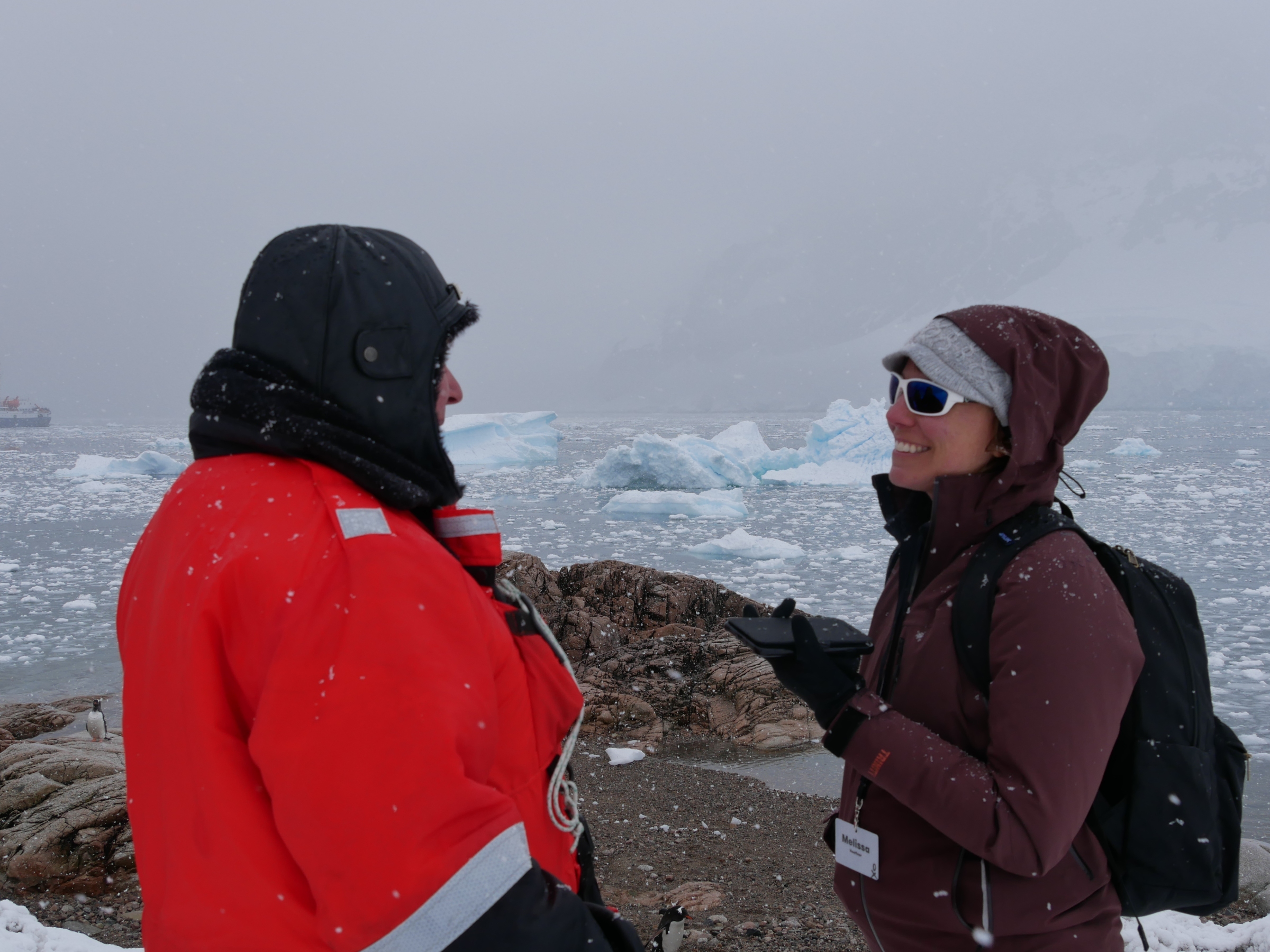 Growing up in a small suburb in the United States, my dream was to move to the big city, to agilely navigate through shoulder-to-shoulder masses of humanity and revel in the clashes between cultures. I didn’t pay attention to the “environment” or “nature,” and it was not a central part of my sociology studies in college. It wasn’t until I was accepted into a transdisciplinary exchange with soil scientists and ecologists that I realized how divorced my social science training was from the natural sciences and how foreign mine was from theirs. After teaching me how to take transect surveys through a creek, the other scientists recommended educating households in order to reduce downstream pollution. Using my sociological training, I observed that the residents in the neighborhood in question were mostly renting and did not speak English as a first language. I argued that English-only brochures aimed at encouraging tenants to make changes to the owner’s property (which would be illegal) would unlikely result in the desired behavior changes the scientists expected. In other words, the scientists looked at the creek, and I looked at the people living by the creek. I realized there was a need for social scientists to engage with natural scientists to make better, more actionable changes if we are to achieve sustainable conservation and environmental justice.

I also learned that I knew very little about the natural world and went on to pursue a PhD in ecology (specializing in human-environment interactions). In the year before graduating, I received an email from Homeward Bound recruiting women scientists to promote leadership to fight climate change. It didn’t escape me that the Antarctica announcement was distributed to the natural science students and not the social science students despite the mounting evidence that climate change is caused by human behavior. If I had stayed on the social science disciplinary track, I would have missed the opportunity to apply. And in fact I almost did not apply. I thought a strong candidate would be someone who studied penguins or glaciers. But I wanted to study scientists, and where better to find scientists than in Antarctica?

Antarctica is species-rich when it comes to scientists—meteorologists, oceanographers, geologists, plant physiologists, you name it. And the ship full of scientists was a contained population of prime specimens! When I landed on the ice, scientists pointed their cameras at penguins and seals; I pointed my cameras at scientists. They were in their natural habitat—in full observation mode. I recorded their sounds and documented their movements. I listened to how they named the stratifications in the rocks and carefully inspected fossils on the land. “There are only two vascular plants that are native to Antarctica,” they said. I nodded and took notes. There was the periodic exclamation of seeing something they had only read about. They pointed to the ice knowingly, confidently. My dataset overflowed.

I don’t think scientists are used to being data. When I shared my transcripts, they grammar-checked them, not realizing they were introducing bias into the sample. They were surprised that they could be considered subjects of research. Their first question was, “Is this data?” Their second question was, “Can this be replicated?”

I have worked with the members of the team featured in this series over the last four years. It should go without saying that scientists are not objective-obsessive robots, but people who care very deeply about precision and accuracy. The scientists I worked with fall on a spectrum of how much they think subjectivity shapes their research.

I can’t describe in words how innovative, open, and courageous they were to take this journey with me. It is not every day scientists are willing to take time out of their own research to do something completely different. I challenged the team to push past their comfort zones. And there were many points of discomfort. I asked the team to attempt what (to my knowledge) no one has attempted to do—to take a group of hardcore positivist scientists through the method of collaborative autoethnography. And you know what? We did it. It was amazing.

There was a moment, sitting around a round table in a conference room at the Rachel Carson Center listening to each other’s recorded interviews from Antarctica. First, we were nostalgic. We were transported back in time to the icy, cold expanse of the Western peninsula. The whipping wind overtook Lindsay’s words, but we listened to her recording all the way through—twice. A boom from an avalanche from a distant cliff interrupted Nicole’s interview. We listened to a snowball fight forming behind Fern as she tried to get her bearings, “What time is it?” “Who knows, the sun never sets, and who cares anyway?” Antarctica is timeless. We listened to Jess scoop a handful of snow into her mouth and proclaim “this is what cold tastes like.” We laughed when Margaret sniffed the air and realized she could finally smell saltwater instead of the dank aquatic scent of penguin colonies. When Ghislaine talked about touching her fingers inside her gloves to feel them, we did the same, remembering the cold.

All photographs courtesy of the author

As we listened to the interviews, I asked everyone to tally the number of words into coded themes because it seemed like a way to work with data that was familiar to them. But I still didn’t think they were convinced that this was research. I nudged them towards seeing the full transcript as a narrative and we thought of words to characterize it. Someone suggested the word “grounded.” Then someone said, “that’s funny that it’s “grounded” because that’s the soil scientists’ interview.” The lights went on. A breakthrough. We flipped through our pages of interview notes and someone made a connection between how our educational training shapes what we choose to focus on. And if our very language is shaped by our perceptions, then it is possible that the research questions we ask and the way we go about answering them are also influenced by what we ourselves bring.

This isn’t to say they became social scientists. I tried to push them further to consider how race and gender also influenced their perceptions—to mixed results. I also learned to question my methods and try to become even more precise and accurate in my data collection and analysis. Autoethnographers have long held that looking in the proverbial mirror is hard and not a one-time shot. It’s a daily practice. And sometimes there are things that you would rather not see—your past biases, assumptions, and attitudes. But this is all part of the process. You see them and you learn from them. And I think that the best way to convince yourself is to collect evidence. We systematically and rigorously documented our work, checking and rechecking for accuracy. We walked through Guba and Lincoln’s (1989) [1] qualitative evaluative criteria and made sure everyone in the team agreed that we met the highest standards of authenticity and trustworthiness.

There is still a persistent and deep divide between quantitative and qualitative researchers. I hope that this experience piques the interest of scientists from all disciplines to step outside of their comfort zones. Maybe they wouldn’t necessarily do an autoethnography, but maybe they would take the time to participate in a completely different method. If they are a sociologist, maybe they could take a transect of a creek. If they are a meteorologist, maybe they could conduct an interview. I don’t know if what I am proposing would help scientists generate new research questions to help us grapple with problems that cross social and ecological systems. I don’t know if it would make scientists more amenable to each other’s methods. However, I do know that there are still considerable barriers separating the social sciences from the natural sciences when it comes to addressing social and environmental problems.

But there is hope. An article was published in Science only very recently arguing that the historical structural racism of urban segregation has changed flora and fauna patterns in cities, and therefore ecologists and evolutionary theorists have to pay attention to social theories and methods [2]. Maybe scientists will never study theories of environmental justice, but knowing they exist helps to ask questions about the relationship between social inequalities and their impact on phenomena studied in the natural sciences. This is exactly what needs to happen.

After returning from Antarctica, Melissa published a book about the Homeward Bound trip. For more information on her book, Antarctica Becomes Her, see here.

Melissa is available to work with transdisciplinary teams on water-related research that integrates climate and societal interactions, especially those that address justice, equity, diversity, and inclusion.

One Comment on “Studying Scientists in their Natural Habitat”