Cross-Species Conversations and the Coronavirus 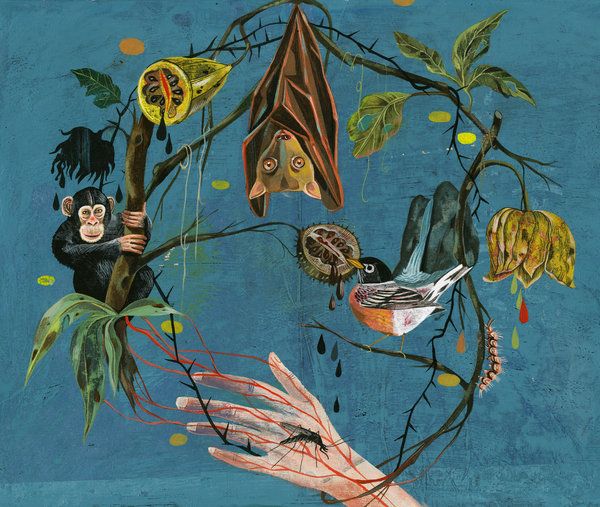 By Serenella Iovino (translated by Elena Past)

Zoonosis. This is one of the strange words that the onset of the coronavirus has forced us to learn. Zoonosis is a transitive infection, a virus that passes from animals to human beings. Or rather: it passes to our species from other animal species, recalling that human and nonhuman animals share an entire biological kingdom and that our bodies’ cells speak languages that are not all that dissimilar. That which affects “them” can affect us, a fact which testifies to an all-too-often forgotten kinship of destinies and origins.

If zoonosis has always been the viral bridge between species, why are the effects so devastating today? We’ve certainly had other pandemics, and many of the diseases that have devastated human populations have been conveyed by other species. Consider, for example, the role of rats and their parasites during the plague, of birds and pigs in the Spanish flu, of Anopheles mosquitoes and malaria, of chimpanzees and AIDS. SARS, Ebola, measles, and diphtheria are also zoonotic. The causes can be traced to a complex network of involuntary exchanges, unwitting passages between hosts and passengers, entanglements of climates and latitudes, conquests, wars, curiosities. All of these contributing factors are part of the coronavirus emergency, and globalization is just one of them. At the foundation lies our hunger for others: other habitats to transform, other bodies to consume, other environments to subjugate, and other humans with whom to share our emotions and our lives, for reasons ranging from love to colonial violence. As David Quammen wrote in Spillover: Animal Infections and the Next Human Pandemic (a book that came out in 2012 and has become a best seller during the coronavirus), our activities are disintegrating natural ecosystems at a dizzying pace. We eat all kinds of animals, raze forests to the ground to make way for grazing and mines, empty the oceans, pave over, pollute, and change the climate. All this helps liberate viruses from their evolutionary niches. No longer finding habitats and ideal hosts with which to travel, they attach themselves to us. There is also a theory that pollution helps viruses spread, as happens with respiratory diseases and many of the pathologies that affect our modern societies.

The truth is that the more we devour nature, the more nature reminds us that, once we’ve consumed all of it, we’ll find it reappearing in other forms. This is true even inside our bodies, which we think of as being more cultural than natural. It makes sense to look closely at how our biological and our cultural being works, and to understand that biology and culture are not disjointed worlds, but rather grow from the same seed. Because we are narrative creatures, the stories we tell ourselves, from bedtime stories to James Joyce’s Ulysses, are as much a part of us as the semiotic capabilities of our cells. The cells of living beings contain information and codes, send one another messages and build chains of meaning that we call “life.” The message the virus sends to our cells is the same message it sends to the cells of a bat or a pangolin. Yet while those animals have been in evolutionary dialogue with the virus for millions of years, our cells have not. Our cells haven’t yet learned the language of those delicate ecosystems. We would be wise not to stick our noses in, leaving these “others” to their conversation.

We humans have, of course, had our evolutionary dialogues, and there’s an “other” in us too. About 50 percent of the cells that make up our organism do not have human DNA. These cells form our microbiota, the bodily ecosystem that makes many of our functions possible, from skin hydration to metabolism. Billions of others live in us: bacteria, fungi, archaea, and, yes, viruses too. Biologist Lynn Margulis explains that we evolved as a result of “symbiogenesis,” a genetic symbiosis with these innumerable, microscopic companions. In an article titled “The New You,” Anthony Doerr writes that if we were to name each one of these companions, calling one name per second, fifty lifetimes would not suffice. The truth is that, from the moment we are born, from our first contact with our mother’s body and the earth, we are colonized by others. Even to say that we are “we” and our microbes are “them” shows how insufficient our pronouns are. For “we” and “they” evolved together over hundreds of millions of years, and so we understand one another. This is what makes viruses that originate in different species and distant habitats particularly dangerous interlocutors.

These considerations allow us to understand that health is not just about individuals or human societies but about the dialogue between species and ecosystems on both a micro- and a macro-level. The only possible approach to researching public health is a systems approach, like that of the One Health Center directed by virologist Ilaria Capua at the University of Florida. Here, health is a conversation between cells, molecules, proteins, and other tiny “speakers” in an enormous, integrated system inhabited by plants, animals, and human beings. After all, we are ecosystems too, and our health relies on the richness and the balance of biodiversity dialoguing within our bodies. Sticking our noses, or our mouths, our appetites, our bulldozers, or our weapons into ecosystems and habitats with their own balance (places of which we are not an evolutionary part) is not only unjust in ethical and ecological terms. It is also damaging to our vital communications. When we stick our noses where they don’t belong, we expose ourselves to a lethal Babel of messages to which our cells are not prepared to respond. At least, that is, until we have a vaccine to act as an interpreter.

← “You have to change your life!” Our Common Post-Corona Future through a Swedish Lens
Corona Crisis, UNESCO and the Future: Do We Need a New World Heritage? →