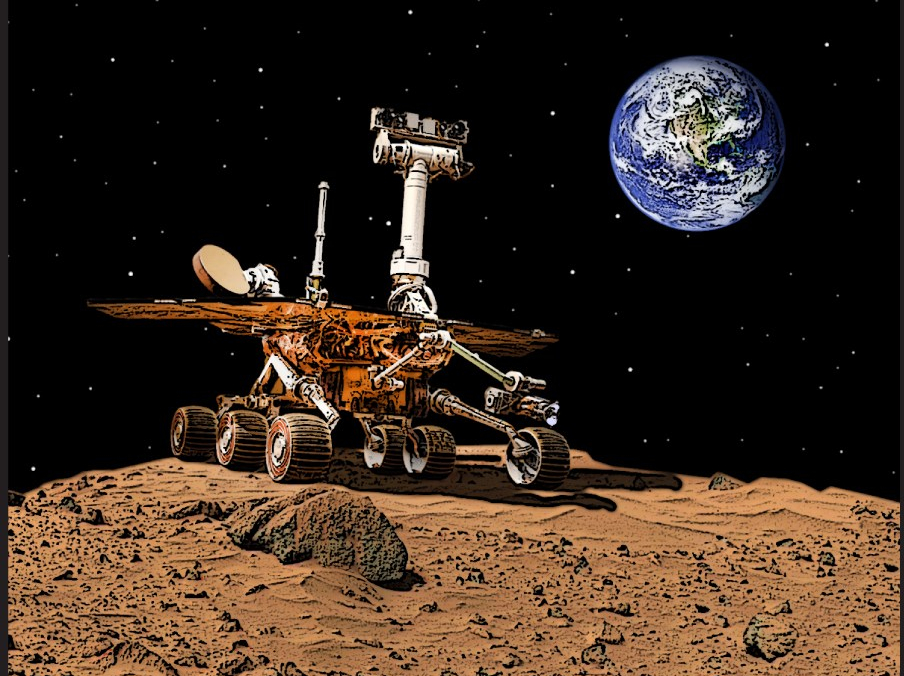 We need a “hardy, soiled kind of wisdom,” Donna Haraway wrote in her recent book Staying With the Trouble, if we are to avert disaster from climate change even a little bit. Challenging and controversial, the wisdom Haraway seeks comes from string figures, nonhuman companions, and her own garden—and, she hopes, will produce a time when the Earth possesses at most 2 or 3 billion humans. Haraway’s call to “make kin, not babies” has garnered reviews disturbed by her radical positions. In confronting climate, there are difficult choices ahead, with voluntary childlessness one effective solution: If we are going to reduce our carbon emissions, why not also reduce our biological presence?

Haraway’s call for a steady, controlled, and peaceful population decline over a century or more, in fact, seems hardly confronting in contrast to the wisdom learned during the heyday of the Space Age. Haraway’s call to not make babies echoes the overriding metaphor for environmentalists in the 1960s, “Spaceship Earth.” In Spaceship Earth, all resources were finite and thus the idea broke with easy and complacent notions of unlimited bounty, resources, or growth. The Earth was likened to a closed ecological space ship, lunar base, or Mars station, wherein air, food, and water become supremely rare and precious commodities. Confrontingly, from the earliest days of the Space Race, NASA administrators knew as well as science fiction writers that no material could be discarded as waste just because it became urine and excrement, or indeed the deceased body of one’s crewmate. Time magazine’s science editor in the mid-1960s (quoted by famed science fiction author Arthur C. Clarke) even suggested that, in order to ensure complete closure of an artificial environment for long-duration space travel, “cannibalism would be compulsory among interstellar travelers.”

The first astrobiological missions in the late-1950s launched dogs, mice, and monkeys into low-Earth orbit for just hours or a few days. By the early 1960s, large-scale experiments attempted unsuccessfully to replicate a working closed environment where material and energy moved continuously through the components and cycles of a complete ecosystem. NASA understood the gravity of the problem of creating and sustaining a closed environment in which life could be sustained. NASA’s earliest closed environments failed because toxins rapidly built up over just days and poisoned everyone in them; they were verily the forecast of Rachel Carson about the reality of living in an increasingly concentrating, rather than diffusing, toxic environment made real. Ecologists like Harold and Eugene Odum readily described new ecosystems, but it was the engineers and life scientists of Boeing, Lockheed, and General Dynamics, all contracted by NASA to build a closed environment, who actually built them. Visionary biologist Lynn Margulis said that “human voyages into deep space require ecosystems composed of many nonhuman organisms to recycle waste into food” in the 1970s,[1] but that was a decade after NASA and its contractors discovered an environment to be a complex, multilayered, cyclical, and interdependent thing (as my recent paper with Kärin Nickelsen explores). In one notable example, NASA and its contractors struggled with the realization that carbon dioxide, methane, and even water vapor could be, if sufficiently present in too large a quantity, toxins every bit as fatal as those that came from industry and flowed out to poison an environment, as Rachel Carson highlighted. Carbon dioxide (CO2) is a waste product produced by all animals from breathing, but equally CO2 is simultaneously a nutrient for respiration by plants. It is not its existence that is the problem, only its concentration and context: at six percent inside a greenhouse CO2 will help plants grow faster, but the same amount inside Apollo 13 nearly killed everyone.

In a recent RCC Perspectives volume, The Good Muck, pioneering environmental historian Donald Worster has come to the conclusion that historians have not paid enough attention to excremental histories, bowdlerizing environmental history by focusing on where food comes from and not where the waste goes. Environmental history, so impressive at illuminating how nature is understood and has been used, stops short when it confronts unsightly and odorous waste. David Soll’s Empire of Water, for example, is marvelously detailed on the evolving story of how New York City consumes nearly a billion gallons per day of water but says almost nothing about the outflow of those same billion gallons. Equally silent about waste have been histories of consumption: unrivaled consumption without thought to waste production is one of the most significant social shifts in human history since just the 1950s, with people in the United States (and elsewhere) embracing the idea that “waste” could just be thrown away.

These days, courtesy of the work of Michelle Murphy and Naomi Klein, it seems obvious that the emergence of the “throw-away” society remains the era’s most pernicious legacy. Now horrifying to millennials, the baby boomers took pride in a time when everything was disposable: as illustrated in the iconic period drama Mad Men, when the protagonist Don Draper and his family go for a picnic to a park in Season 2, episode 7, “The Gold Violin.” At the end of the meal, his wife Betty first checks the cleanliness of her children’s hands before shaking off from the picnic blanket the unwanted containers, drink bottles and caps, paper plates, and napkins. Leaving the “trash” strewn across the grass, everybody walks unconcernedly back to the car. In the same episode, Draper’s advertising staff are trying to put together a campaign to sell Pampers diapers, which while expensive, have one key advantage: “You get to throw them away.” As Haraway has already said, environmental waste was intimately connected to human reproduction and childcare.

My coauthor, Kärin Nickelsen, and I are exploring how “waste” was reconsidered in the Space Age in the ongoing attempts to build an artificial environment to live in space. Our forthcoming book, To Live Among the Stars, offers the stories of the many inventions to let space travelers drink recycled toilet water or eat algae grown from feces. Unexpectedly, it is the Space Age—not ecologists or environmentalists—that first created equipment to regenerate useful materials from waste products. Just like NASA and its military-industrial contractors, Soviet space scientists and engineers concluded in 1971 that life support in a closed system “consists of the members of the system eating each other’s metabolites.” At NASA’s Langley Research Center, oxygen reclamation studies took place next to a million-dollar facility devoted to building a life support system capable of supporting four men for one year by recycling all water. Over at the Manned Spaceflight Center in Houston, people were working on food and waste management.

NASA has been obsessed by waste for decades now: in the 1990s, Wendell Mendell of NASA’s Mission Science and Technology office told an audience that “one might even consider establishing tourist facilities as long as they pay their way and leave their waste!” as a way to economically move material into space. Mendell could make such a claim because on Spaceship Earth, just as in a spaceship orbiting Earth, there is no waste. “Sewage” is not a pollutant to be eliminated or disposed of but rather a valuable and available source of unprocessed nutrients to be reused, recycled, and returned to a crew. Yet, decades after the world was made aware of the dangers of global climate change, the global glut of waste, and overpopulation, those same problems that the Space Age faced in the 1960s have barely been mentioned, let alone addressed. For all our efforts in recycling or limiting CO2 emissions, closing cyclings of waste from our bodies to make food for our bodies is invisible or unmentionable. As we all travel in Spaceship Earth, waste remains a diseased by-product to be eliminated, not a source of nutrients to be recycled back to ourselves. My claim, then, is that humans must go to Mars to demonstrate that they can correctly engineer the problem of living on Earth. The lack of substantial progress in this field has chronically delayed not only the further exploration of space but the potential for its habitation, and has lessened our hope of our own continued habitation on Earth.

[1] Our thanks to Luis Campos for this reference.