Transformations in Environment and Society 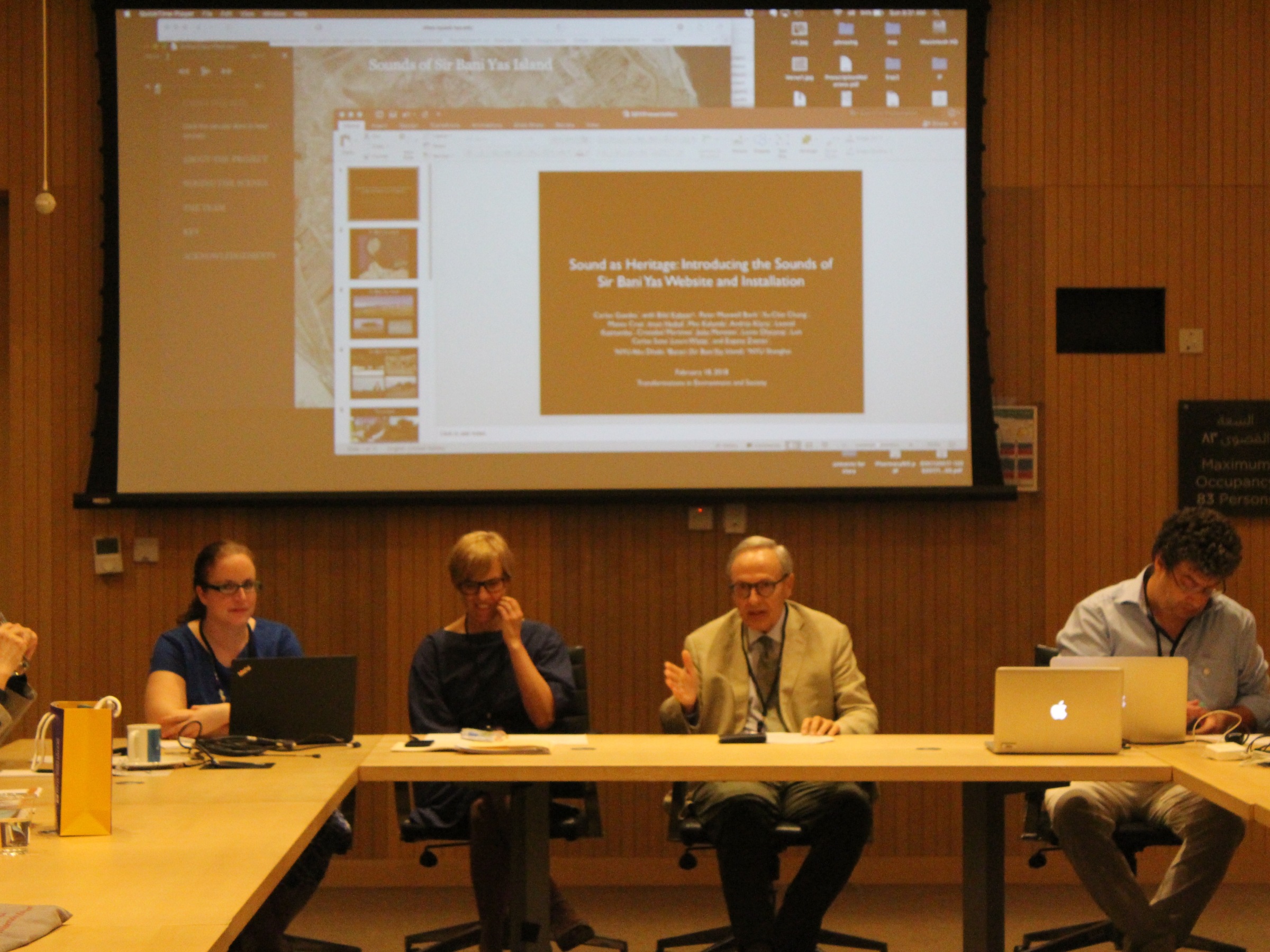 In February 2018, a group of Carson fellows and staff headed to Abu Dhabi—not for a mid-winter beach trip, but rather for the inaugural collaborative workshop between the RCC and the newly founded Earth Humanities Research Initiative at New York University Abu Dhabi. This exchange was the brainchild of Carson alumna Sophia Kalantzakos, who after her stay in Munich in summer 2015, returned to Abu Dhabi and began mobilizing both the humanities and arts faculties with diverse programming on environmental issues.

Designed as a “works in progress”-type workshop, all participants submitted working papers before the event. The workshop was organized into a series of panels, which were interspersed with climate meditation, documentary films, art projects, tours of exhibitions, and even the performance of a play. The full schedule and profiles of all participants can be found here.

The central theme of the first panel was the issue of paradox in sounds and stories. Carlos Guedes talked about his sound installation project on Sir Bani Yas Island, a natural island that is home to the largest wildlife preserve in the United Arab Emirates. He uses recorded sounds of wildlife (and tourists) to highlight and question the naturalness of nature reserves. Arielle Helmick presented on John Denver, a case study from her work on green pop—environmental pop songs—in the United States. By looking at Denver’s own constructed identity as well as reading his songs, she demonstrated the pitfalls and potential of using popular music for environmental causes. Finally, Jill Magi discussed the idea of ecopoetics, including her own work, to tease out different layers of meaning in written words on the environment.

The next panel featured three papers that all analyzed the use and meaning of water and also showcased three distinct regions of the world (Uganda, Colombia, and Arizona, USA). Jennifer Lee Johnson’s work traces the shifting understanding and construction of the Enkejje fish, found in Lake Victoria, demonstrating how, over time, the same fish can have very different uses and even names. Marcela Lopez profiled different water systems in Medellín, Colombia, to document access to water as well as to examine whether or not water is a universal human right. Katherine Morrissey described expeditions to the Sahara desert by early-twentieth-century scientists and scholars who worked in the Arizona deserts. She documents the goals and experiences of these trips, along with the transfer of species and knowledge they brought about.

Charles Siebert, professor at NYUAD and a writer for The New Yorker and The New York Times (among others), gave a talk on “The Anatomy of Empathy” during lunch. He established connections between humans and animals by looking at different case studies where animals in captivity have taken on human attributes (in this case, speech) in order to connect with humans, the only species around them. He described a rehabilitative project for war veterans and parrots in the USA, where the former soldiers and abandoned birds are rehabilitating each other. Following his talk, filmmaker Alexis Gambis screened three of his short mockumentaries on issues of environment and society. In one film, Gambis uses a clown dressed as a butterfly to highlight the plight of monarch butterflies in Mexico and the United States.

The first day concluded with participants exploring some of the constructed environments of Abu Dhabi—a highlight was the newly opened Louvre Museum Abu Dhabi, which sits on an island that did not exist 10 years ago, followed by a visit to a modern-day souk, in a downtown air-conditioned mall.

The third panel (and day two) began with four papers that examined environmental transformations in China. All of these papers considered China’s goal of an ecological civilization in one way or another and all looked at the role of the state in environmental protection. Sophia Kalantzakos presented on the Belts and Road Initiative that China is pursuing throughout Asia and Africa, and questioned the implications of the project for the environment. Travis Klingberg looked at tourism development in Daocheng County to highlight the positive and negative implications that a recently developed tourism industry is having on the region. Yifei Li used the case study of the 2008 Sichuan earthquake to profile the implications of disaster-relief efforts in China. And, finally, Mark Swislocki created a “green wall” of China by describing and documenting historical plaques on forest management that he has found in the Yunnan Province.

The fourth panel considered ways that humans react to changing environments as well as issues of environmental determinism when analyzing social problems around the world. Nora Bakarat looked at the discourses of land improvement in the late Ottoman Empire and drew parallels to similar movements in Anglo-American and French-Algerian contexts. Andrew Bell described his agent-based economic model, MIDAS, and demonstrated how it can be used with climate change and migration to see which places offer the best utility networks. Javier Puente gave an environmental analysis of rural insurrections in Peru between 1983 and 1986; he traced how environmental factors like floods and droughts further contributed to the conflicts of this era.

Following these panels, Una Chaudhuri and Marina Zurkow introduced their “Dear Climate” project—an “agitpop” project including posters (free for download and distribution) as well as other audio/visual experiences to raise awareness about climate change. They asked the participants to consider the posters and give their responses—which ranged from a sense of the silly to appreciation of the quirky and ironic nature of these works. Marina Zurkow had even made a poster in honor of the workshop, based on Jennifer Lee Johnson’s presentation about the Enkejje fish:

During lunch, the participants were treated to a performance of Amahl Khoury’s play, “Oh How We Loved Our Tuna!” staged by students in the NYUAD drama program. The day concluded with a visit to the Grand Mosque of Abu Dhabi and a final dinner for all workshop participants.