Asia and the Pacific: Environments—Cultures—Histories

(All sketches by Libby Robin)

Flood-proof cities. The social costs of waste incineration. Water level changes in the Pearl River Delta. The environmental impact of nineteenth-century Chinese immigration across the Pacific. These are a sample of the topics discussed during the “Asia and the Pacific” workshop, hosted by the Rachel Carson Center for Environment and Society in early November.

The workshop was was organized by the Rachel Carson Center in collaboration with the LMU China Academic Network (LMU-ChAN) and it received funding from the German Academic Exchange Service.

The “Asia and the Pacific” workshop included paper sessions and a roundtable discussion, and was concerned primarily with China’s environment from an environmental humanities perspective. The workshop filled two days and was co-convened by Christof Mauch, Travis Klingberg, and Simone Müller. 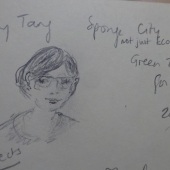 For the opening panel chaired by Travis Klingberg, “Nature and Urbanism in Contemporary China,” Jiang Xu, Dorothy Tang, Shih-Yang Kao, and Mee Kam Ng covered, respectively, the discourse of “environment” in Guiyang’s urban master plan; the decentralized, partial intervention that Xi Jinping’s “sponge city” idea has made in China; a study of neighborhood-scale, zero-waste initiatives; and a case for a new ethics of socio-ecological development through traditional Chinese thought.

To end the day, Han Zhaoqing and David Chen, in “Rivers in China” chaired by Donald Worster, discussed the need for a comprehensive, longue durée history of the Yellow River and the decreased channel storage and flood concentration resulting from human impacts on the Pearl River Delta in the 1980s and 1990s. Donald Worster, in a coda, remarked on China’s long history of human impact on its rivers.

The second day of the workshop included a roundtable discussion and paper session on both historical and philosophical dimensions of nature and culture:

In the roundtable discussion chaired by Christof Mauch, “Transformations in Pacific Landscapes and Culture,” Maxime Decaudin, Fei Sheng, Xiaohui Liu, and Yuan Xu expanded the discussion of China’s environment across the Pacific in the nineteenth and twentieth centuries. They discussed how the British imagined Hong Kong as a barren island in need of colonization for ecological reasons, how China actively changed ecosystems in the Pacific through ocean harvesting and fishing, how Chinese immigrants in California changed ecosystems through new food cultures, and how tackling climate change today provides China with the opportunity to tackle multiple policy goals.

The final paper session of the workshop, “Nature East and West” chaired (and translated) by Shen Hou, challenged conventional cultural and philosophical Chinese conceptions of nature. Zuoteng Huizi, Wang Jiange, and Xia Mingfang presented perspectives on the confrontation between foreign and domestic botanical knowledge through the work of Ernest Wilson, the roots of East/West misconceptions of nature (particularly around changes in China after the Song Dynasty), and the historical tension between Chinese desires for harmony with nature and the environmental factors that made this impossible.

One of the strengths of the RCC is in bringing academics from a variety of fields together. In this workshop, twenty-two scholars of China, Asia and the Pacific contributed expertise in history, geography, economics, political science, landscape architecture, and hydrology. What emerged over the course of two days, among many things, was a demonstration of the relationship between contemporary and historical events in China, as well as the value of a deeply interdisciplinary discussion of China’s environment.