Historians like traditions and they like to invent them. Helmuth Trischler, director of the Rachel Carson Center and head of research at the Deutsches Museum, made this remark as he looked back at the conference’s five-year history. In May 2017, international scholars came together in China for the fifth time since 2012 to discuss environmental history. Jointly organized by the Center for Ecological History (CEH), the Max Planck Institute for the History of Science (MPIWG), and the Rachel Carson Center for Environment and Society (RCC), the conference took place in Beijing at the Renmin University of China from 25 to 27 May. Its 24 participants came from North and South America, Africa, Europe, and of course Asia.

The opening ceremony included welcoming remarks by several prominent faculty members of Renmin University: Vice President Dayong Hong; Xingtao Huang, dean of the School of History; and Mingfang Xia, director of the CEH and a senior professor in the School of History. Shen Hou, deputy director of the CEH and associate professor of history at the university, provided translations both during the opening ceremony and throughout the conference.

In the opening ceremony, Dayong Hong remarked that for a long time, historians in China only paid attention to dynasties and politics, but not the environment. This attitude has been changing in recent years and ecological history in China has become a new field of history. While the English title of the conference is “Knowing Nature,” the Chinese name derives from a 2000-year-old poem and means “Asking questions about nature.”

Following an introduction by Donald Worster—the Hall distinguished professor emeritus of history of the University of Kansas and a distinguished foreign expert at Renmin University— MPIWG managing director Dagmar Schäfer gave the keynote address. Schäfer gave a part of her talk in Chinese, which she has been studying since the age of 18. She presented the silk worm as a symbol of China and knowledge, and the transfer of knowledge from dynasty to dynasty. With this example, Schäfer illustrated the need to revisit concepts of temporality in Chinese history, which is still largely based on dynasties—a form of temporality that overlooks the different dynamics of nature knowledge and local experience. She pointed out that environmental history should look at how actors have dealt with the presence of multiple temporalities in Chinese history, and proposed searching for a new analytical framework outside of dynastical thinking and beyond linearity. This strong focus on dynasties was raised as an issue time and again during the course of the conference.

Similar to previous years, the format chosen for this year’s conference involved pre-circulated papers, which were presented and critiqued individually on the second and third days of the conference. The plenary also had the chance to ask questions, and authors were given time to comment and respond. This format enabled in-depth discussions about all papers.

The first session, Tangled in the Web of Life, was moderated by Donald Worster and included a discussion of SARAH EHLER’s paper on the Tsetse fly and ways to control the sleeping sickness in the Lake Victoria region from 1900 to 1920; QUN CHE’s case study of the schistosomiasis epidemic in Hunan in the eighteenth and nineteenth centuries; SANDRA SWART’s study of “blood, bones, and baboons” as ways of knowing South Africa’s socio-environmental history; DOROTHEE BRANTZ’s paper on Berlin’s zoo and the museum of natural history in the nineteenth century; LING CAO’s research on the spread and cultivation of maize in China based on local gazetteers; and ALAN MACEACHERN’s analysis of phonological records of weather and climate in Canada.

Grasping the Restless Earth was the title of the second session, which was moderated by Agnes Kneitz. This session included LINO CAMPRUBI on the emergence of the global environment; KATRIN KLEEMANN on a history of understanding the impacts of the Icelandic 1783 Laki Fissure eruption; ;MENGMENG SUN on Co-Ching Chu’s thoughts about climate change, and on fears of a new ice age; YONGXIANG LI on disaster myths of ethnic groups in Yunnan in China; JOSÉ-AUGUSTO PADUA on a critical understanding of nature and nature destruction in Brazil from 1790 to 1825; and ZANWEI WANG on earthquakes in China and Japan, and the development of seismology.

The third session, titled Managing the Wet and the World, was moderated by HUA-PI TSENG. Papers presented included YU HUANG on pharmaceutical residues in aquatic food safety control in South China; EVA JAKOBSSON on water knowledge through the eyes of a natural historian in the eighteenth century; MINGTAO PAN on the evolution of water management theories in China from the fifteenth to the nineteenth centuries; STEFAN DORONDEL on reclaiming wilderness along the Lower Danube River; ANNA OLENENKO on the Ukrainian steppe wetlands, where scientific concepts meet landscape construction; and JINGHAO SUN on how water management of the Grand Canal has connected the north and the south of China over six hundred years.

Hao Chen moderated the fourth and final session, Developing the Country, which discussed the papers of PETER LAVELLE on knowledge about natural resources in nineteenth-century China; JAMES LIN on missionaries and science in China from 1920 to 1949; SREEJA JAISWAL with a case study on the Konkan Railways in India; MARIA AVXENTEVSKAYA on the “environment in translation,” which looked at the establishment of Russian forestry management based on the German model; SHANNON STUNDEN BOWER on the Canada Land Inventory and the Canada Geographic Information System in the mid-twentieth century; and IAN CAMPBELL on agriculture in the Kazak Steppe between 1868 and 1917.

The concluding discussion between Mingfang Xia and Helmuth Trischler was moderated by Shen Hou.

The conference brought together participants from across the globe, as well as from different disciplines and bodies of knowledge: from the history of science, environmental history, and the environmental humanities.

Helmuth Trischler observed that the issue of periodization raised by Schäfer (who connects West and East Asian scholarly communities) influenced discussions throughout the conference. It is a historian’s task, he said, to order historical change. Up till now, a preference has emerged among several Chinese scholars for the longue durée approach of covering several centuries, whereas many Western scholars are often happy to “master” one century. He suggested that a less linear perspective—and a more layered understanding of history—might be a preferable approach. Other key aspects Trischler identified included: being aware of asynchronicity and the specificity of environmental knowledge; the importance of languages for the circulation of environmental knowledge; how crises sometimes act as a vehicle for societal or environmental change, pointing us to overlooked connections; the role of local and global knowledge; and elaborating on the fairly new concept of experts.

For Mingfang Xia, the conference shed light on how our misunderstandings can offer new insights, which provide fertile ground for generating new knowledge. He returned to the conference title in his closing remarks, noting that at first glance, it appears to be completely harmonious; a closer look reveals a certain tension between East and West, between traditionalism and modernity.

The conference concluded with a banquet, and a delightful and rather interesting performance. If you happen to be reading this whilst preparing for the next conference, start thinking about a song that you can sing a cappella. Because you will have to do just that. Any historian reading this will be well aware of the importance of traditions. 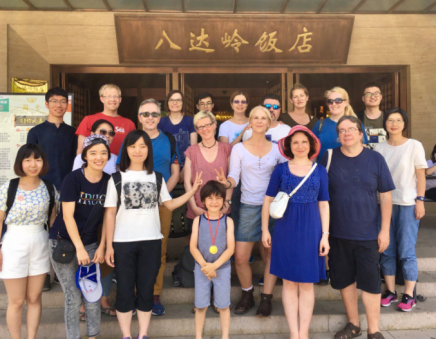 After learning much about Chinese history and traditions, several participants joined a field trip to the Badaling Great Wall of China on the fourth day of the conference. Photo: Alan MacEachern.

← The History of Munich and Its Loam
CfA: General Operations Internships at the RCC →