A Forest of Signs: Mindful Communication in Human-Nature Relations among an Indigenous Community in the Brazilian Rainforest

During my fieldwork among the Sateré-Mawé, an Amerindian community in the Brazilian rainforest, I tried to find an adequate term to characterize the disposition of human agents when dealing with their non-human environment. I kept thinking about something like “attentive” or “mindful” as apt expressions, the latter already being somewhat familiar to me through my wife who works in a psychiatric hospital and had told me about therapeutic exercises called MBSR (mindfulness-based stress reduction). Only later on did I become aware of the fact that “mindfulness” is not only an age-old spiritual Buddhist concept (sati), but also a keyword in Buddhism-inspired notions and practices within environmentalism. Figures in this movement include Stephanie Kaza (Mindfully Green, 2008) and of course the Vietnamese monk Thich Nhat Hanh.

What therefore follows is a modest exercise in bringing together seemingly disparate concepts of human-nature relationships, motivated not by a desire to reveal structural or even cultural-historical continuities, but by the fact that we all live together in a heavily globalized world facing crises. We therefore have to come up with communicable solutions to our common problems.

It has become a cliché to associate indigenous societies of the Amazonian rainforest with worldviews that we Westerners have come to call “sustainable.” Danish anthropologist Kai Århem has coined the phrase “eco-sophia” to characterize indigenous nature philosophy based on reciprocal or balanced relations between humans and nature. There has been ample proof that this kind of Amazonian eco-sophia can be held responsible for the region’s “socio-biodiversity,” i.e., the ongoing biological and social copiousness of life in Amazonia. What has been less understood is exactly how this eco-sophia translates into what Venezuelan anthropologist Eglée Zent (2013) has called “ecogony,” the causal reasons that trigger socio-ecological behavior. Zent brings out the specific “hyper-awareness” of rainforest dwellers of all living things’ dependence on each other and stresses the fact that this condition of interdependence confers rights and duties on all the human and non-human subjects involved in this complex entanglement of forest relations.

Readers more familiar with Buddhist-inspired environmentalism may recognize that some of these notions strike a familiar chord: an outwardly-oriented mindfulness, a heightened sensitivity for the realities of nature and human experience, the intimate connectedness of human and non-human realms—what Thich Nhat Hanh has famously called “inter-being”—and the fact that successfully managing this inter-being is the precondition for one’s personal integrity and well-being. Finally, the way in which human practitioners of mindfulness exercises tap as a source of happiness and comfort what Thich Nhat Hanh calls the “ultimate dimension”—as “birds enjoy the blue sky or deer the green fields”—chimes with Amazonian concepts of the creative power of primordial time, laid out in Amerindian narratives, which provide the charter for indigenous ecogony. And, most importantly, as representatives of an engaged Buddhism of the kind practiced by Thich Nhat Hanh, many people today nonetheless suffer because of their broken connection to Mother Earth. The practice of mindfulness has healing potential, just as the integrity of the Amazonian person fully depends from his or her successful relations with the environment.

My fieldwork among the Sateré-Mawé aimed at understanding human-nature relationships in times of accelerated cultural change. I learned much about these complex relationships while walking along well-trodden forest paths, with my Sateré-Mawé collaborator “mindfully” pointing out plants to me that held some significance for him. By this deliberately random method we assembled a kind of historical palimpsest of strategies for using the material and immaterial resources of the forest. Unfortunately, this vast store of traditional environmental knowledge laid out along our paths is nowadays almost unavailable to the younger generation of Sateré-Mawé. This intellectual loss amounts to a loss of the capacity to communicate with nature. If “inter-being” means the possibility a having real communication with the Earth, we should try to maintain this capacity to communicate. What we need to preserve is not only the forest as a natural habitat, but the communicative environment based on this culture-specific mindfulness of human agents towards the non-human world. Seen in this light, seemingly exotic notions and practices of the Sateré-Mawé come across as less outlandish. I present some examples we came across while hiking through the forest of the Sateré-Mawé.

Some unimposing leaves on the forest floor nevertheless bear witness to the presence of primordial creative power:

This leaf is called aperu yhop. The red color of its outer side comes from the blood of the slain guaraná child, as the wasps have used these leafs to carry the blood to Uniawasap’i to inform her of the death of her beloved son. Out of the child’s body grew the first guaraná shrub. Up to now guaraná, from which a caffeinated beverage is made, has been central to Sateré-Mawé spirituality: its ritual consumption creates awareness of tribal knowledge and produces the “good words” prerequisite for a social good life.

The mindful passerby becomes aware that primordial creativity continues to be inscribed into the landscape. These objects at the side of the paths show humans that this creative power is still available and its spiritual resources can be tapped from the “ultimate dimension.” 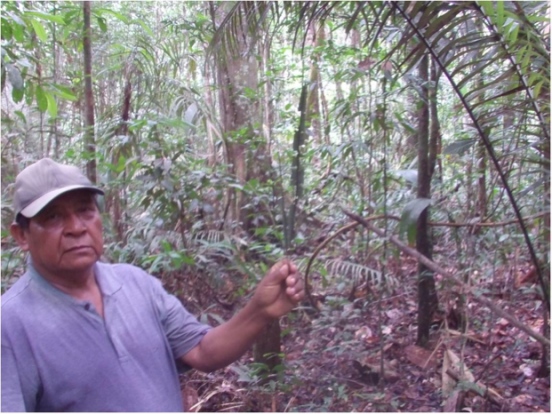 This man shows the leaf hutuk’i yhop, which can be used in hunting magic. Its furcated form alludes to the form of the hutuk’i bird’s tail feathers, a bird which nests underground. By rubbing the hunter’s dog with the leaf, the dog will be willing to enter holes in the ground to chase animals hiding there. Again, in the mythical dimension the hutuk’i bird possesses shamanic powers.

Some of these hunting rituals implicate a kind of contract with a supernatural entity called ase’i kuru (or Curupira in Amazonian vernacular). If a hunter decides to use plants associated with Curupira, his success in hunting depends on his compliance in observing a complex web of rules and restrictions. 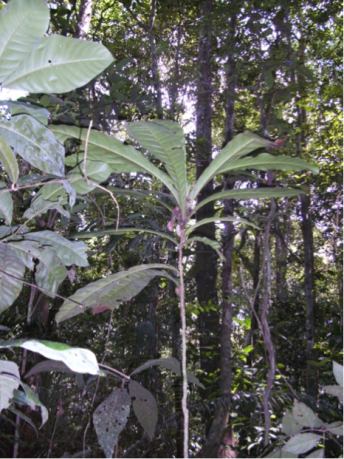 This is ase’i kuru eputu yp, “Curupira’s Sword.” The vegetal material caught in the foliage is used to rub the nose of the hunter’s dog, which bestows him with a “capturing” quality. The application of this magic is considered to be fino (delicate), because Curupira demands the observance of a whole series of rules (e.g., the hunter has to abstain from certain parts of the prey). The rules even extend into social relations: menstruating or pregnant women have to abstain from the meat, and the hunter cannot be stingy when distributing meat among his relatives. If the hunter violates Curupira’s rules, he runs the risk not only of losing his luck in hunting, but also his physical and mental integrity.

From the perspective of the Sateré-Mawé, “inter-being” amounts to acknowledging the non-human entities of the forest as subjects, with whom the tribe cannot interact in an irresponsible and antisocial way. The art of forest life depends not least on one’s ability to communicate with them and to read the signs offered by the forest. In other words: to move mindfully through a communicative forest remains one of the preconditions for responsible management of this environment.

One Comment on “A Forest of Signs: Mindful Communication in Human-Nature Relations among an Indigenous Community in the Brazilian Rainforest”