After The Fire, The Flowers Bloom

Posted on September 25, 2013 by carsoncenter

Reposted from Wild Mountain Echoes by kind permission of Christine Hass. Christine is a professional ecologist interested in mammal social behavior, including the role of sound in social communication. She also enjoys recording natural soundscapes, many of which feature in her blog posts.

It seems as if every mountain range in the southwest has had a huge wildfire in the last decade or so.  Millions of acres burned, forests charred, ecosystems altered.  If the drought continues, it may be millennia before some of the dryer, south-facing slopes see a forest again.

The Horseshoe 2 fire burned in the Chiricahua Mountains of southeastern Arizona from May 8 to June 25, 2011, consuming 222,954 acres of oak, pine, and fir forest.  The Chiricahuas are one of the largest Sky Island ranges, with several peaks exceeding 9,500 feet in elevation.  For many years, I’ve made a summer sojourn to a campground at Rustler’s Park, high in the mountains, during August when the wild raspberries are ripe.  Rustler’s Park was a cool oasis during the summer, with beautiful, tall Douglas-fir and Ponderosa Pine trees.  A wet meadow ran along one edge of the campground.  I was surprised to learn that this cool, wet spot was destroyed in the fire, with nearly all of the trees killed.

I visited the area again last August, parking at a nearby trailhead and hiking into the raspberry patch.  Ferns, grasses, and wildflowers covered the ground previously covered only with pine needles.  In some places, the new growth was so lush that it was hard to find the trail.  The raspberry patches had not only survived the fire, the raspberries were more abundant than ever.  Broken raspberry canes and bear scats full of raspberry seeds let me know the black bears survived the fire, too.  The view from the crest trail revealed a lovely mosaic of burned and unburned patches of forest.

I returned to the Chiricahuas a couple of weeks ago to record the sounds of spring in the mountains.  A friend and I camped in Pinery Canyon, in a spot surrounded with Apache Pine, Douglas-fir, Chihuahua Pine, Western White Pine, Gambel’s Oak, Arizona Oak, Silverleaf Oak, and Arizona Walnut.  The fire barely touched the little forest grove, but large patches of burned-out forest surround the camp.  The trees swayed in a stiff breeze, yet the place was alive with birds, the most vocal of which were Western Tanagers and Red-faced Warblers. 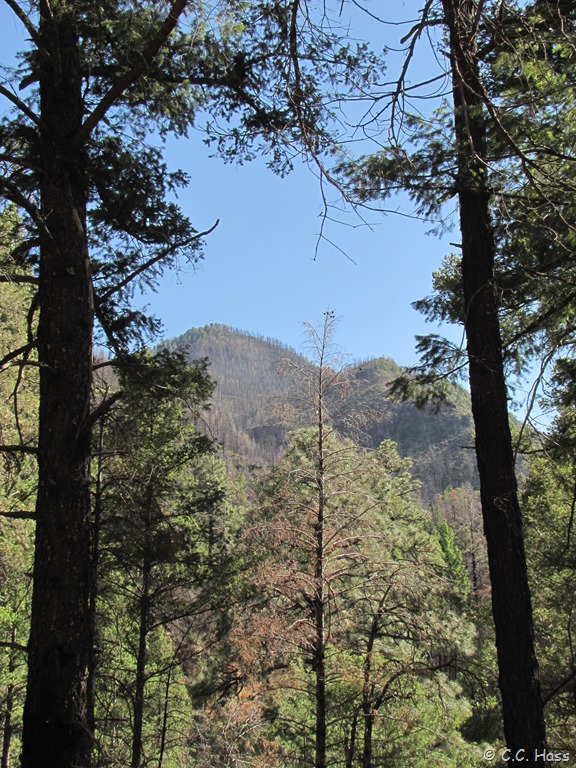 The wind blew for the first day and a half we were there, creating interesting acoustical effects – the soft whisper of the wind through living pine and fir needles, the howls of the wind through tree skeletons.  The wind through the dead trees sounded like a jet flying overhead.  The great listener John Muir also noticed these differences in the sound of the wind in the trees:

…the profound bass of the naked branches and boles booming like waterfalls; the quick, tense vibrations of the pine-needles, now rising to a shrill, whistling hiss, now falling to a silky murmur…

The wind died down a little at night, providing background accompaniment to crickets and whippoorwills. We also were treated to some amazing dawn choruses, which I’ll present in another post.

In many places, the forest is on its way back.  The oaks are re-growing from their bases, new small forests of pines and Douglas-firs have sprouted up, barely visible through the lush grasses and forbs.  Drier places will likely be taken over by shrubs.  The new growth is a haven for a huge variety of butterflies and other insects, which in turn are food for birds and mammals.  After the fire, life goes on in the Chiricahuas, even if it doesn’t quite look the same.

Fire reminds us that nature is not static.  Ecosystems are processes, constantly changing from one state to another, with an ever-changing cast of characters fulfilling the vital roles of producers, consumers, and decomposers.  No matter how much we want it to, not even rock stays the same, eventually broken down by wind and water, tree roots or lichen.  Trying to keep things exactly the same is just a waste of time. 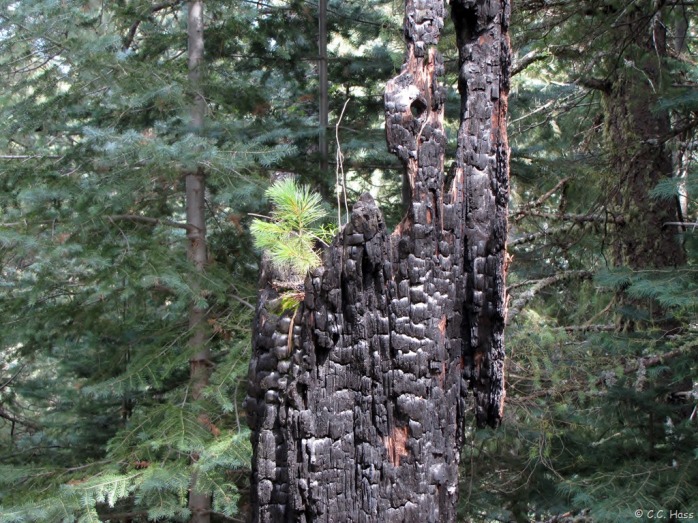 Recording notes:  Recorded with Sony PCM-M10 with Audio Technica AT2022.  Recordings subject to amplification and equalization.